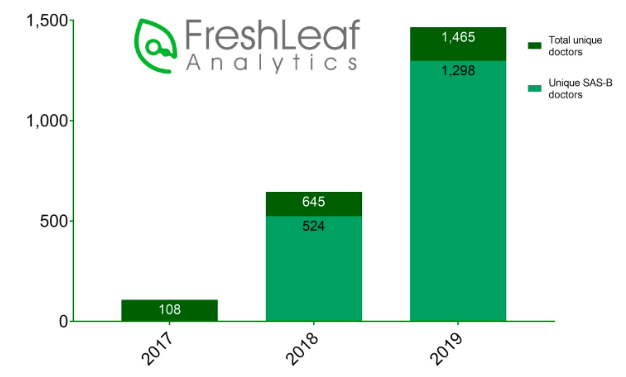 The TGA tends to avoid speaking about prescriptions because they have no direct oversight regarding scripts. Instead they focus on SAS-A/B approvals and AP notifications. These can be considered proxy figures for access. And if you have empirical data about prescriptions per approval, and empirical data about patient attrition rates (such as FreshLeaf does), you can model current active patients to a reasonable level of accuracy.

The DoH has also published information on the number of unique doctors who have prescribed medical cannabis and broken that down by access pathway. And this is probably the most encouraging statistic in the whole document. What it shows is that since 2016, over 18,000 unique patients have received access to medical cannabis. And those 18,000 patients have been treated by 1,465 unique doctors. This averages out at 12.2 patients per doctor. Now it’s very likely this average is pushed up by doctors specialising in cannabis medicine such as those at Cannabis Access Clinics. It’s possible that a few dozen doctors represent a majority of patients. But that would mean that over 1,000 doctors in Australia, unaffiliated with a specialist cannabis clinic, have taken it upon themselves to prescribe. And that’s terrific.

Unique doctors who have prescribed cannabis

This shows just how important the online SAS-B portal, implemented in mid-2018, has been to meaningful improvements in patient access. The DoH has also provided an updated State/Territory breakdown for SAS-B approvals by doctor location. These are the figures for calendar year 2019: 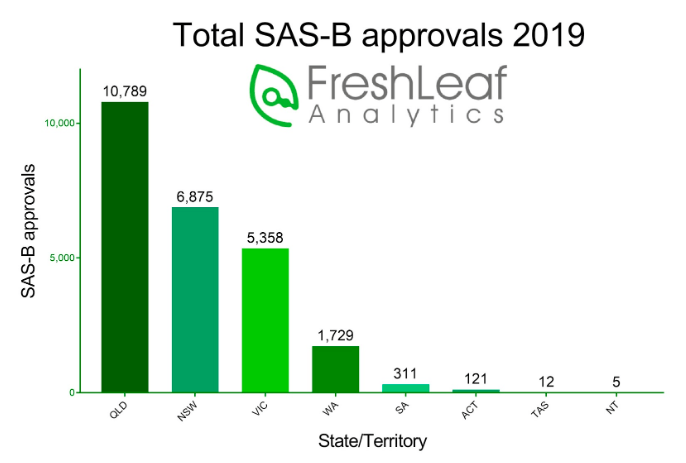 As you can see, QLD is way out in front despite their population being smaller than NSW and VIC. This graph shows the total approvals for the year, but in order to properly compare jurisdictions, we need to account for the population of each State/Territory. To that effect, here is a graph showing how many SAS-B approvals were issued in 2019 in each jurisdiction per 10,000 people living there: 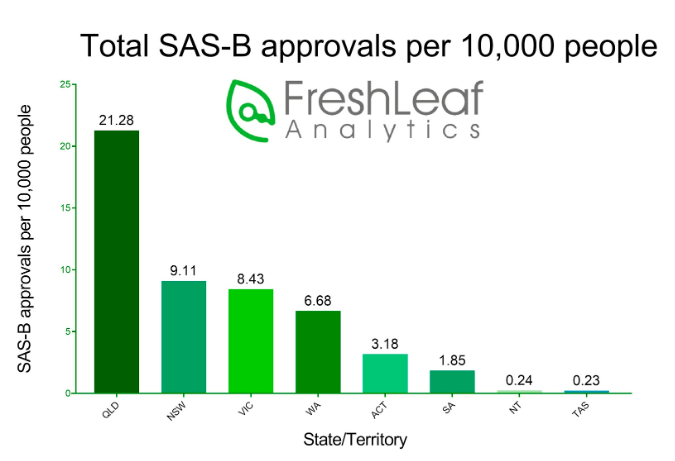 This is a better demonstration of just how far out in front QLD really is in terms of patient access. And how far behind places like TAS, NT, SA and the ACT are. But there are two caveats to this data: first, it doesn’t include AP patients. But the DoH has also estimated that only 655 unique patients have received access via an AP, so that’s not a big issue. A total of 74 doctors have been cannabis APs at one point in time, although only 22 are currently authorised. Second, this doesn’t include patients who have been prescribed a compounded product.