Another record month for medicinal cannabis approvals in Australia via the Special Access Scheme Category B route! 3,594 approvals were issued in October 2019. It’s worth remembering how far the Australian market has come in just the last 12 months. In October 2018, there were 331 approvals. That’s an increase of over 985% in the last year. But beyond the headline figures, some interesting trends are emerging. 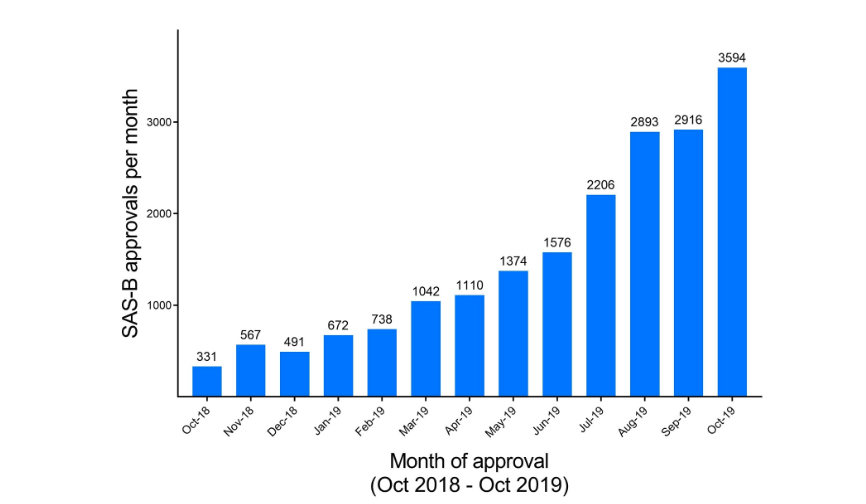 In April 2019, QLD amended their patient access process making it easier for doctors to write prescriptions. So since April, almost all QLD doctors have only required Federal approval, speeding up processing times and reducing paperwork.

This had an almost immediate impact on the number of QLD approvals. Although we saw modest monthly increases across all States/Territories this year, QLD went from 284 approvals in February to 1,311 approvals in August. A 361% increase. Over the same time period, NSW went from 246 to 739, a 200% increase, despite having a much larger population. QLD is also well serviced with a variety of access clinics, which would have contributed to this relative increase. 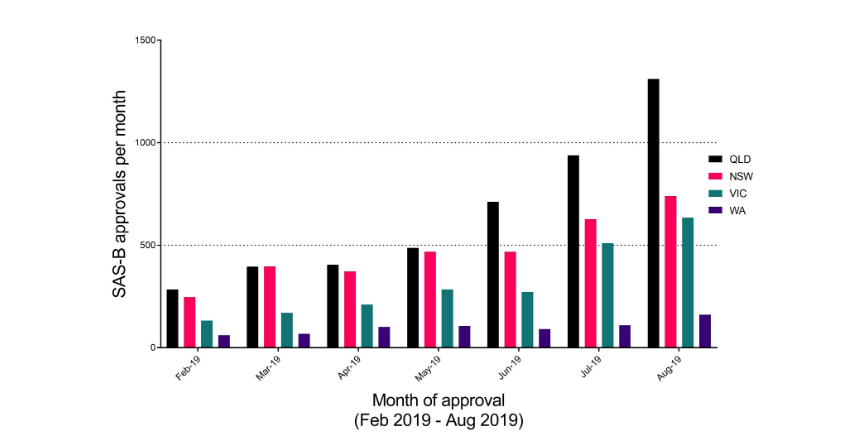 The next State to watch will be NSW. Similar to QLD, doctors in NSW used to require additional State approval before they could prescribe. This was a time-consuming process that caused a lot of frustration for patients and doctors alike. But in September, NSW went the way of QLD and scrapped this additional approval. And if NSW behaves like QLD did, this should have a major impact on the number of approvals being issued. Although it will probably take a few months for this trend to emerge.

The last six months have not been kind to cannabis stocks. Initially rosy growth in the first quarter has been totally eroded by brutal write-downs and a loss of investor confidence since March. Financial analysts have covered this trend in depth. Suffice it to say the animal spirits aren’t happy. And Australia has not escaped this global downturn. For example, Cronos Australia’s IPO opened 29% down this morning.

Much like the ‘web 2.0’ that followed the dotcom crash, the recent rude financial awakening of ‘cannabis 2.0’ has people asking what are these companies actually making? Who are they actually selling to? And particularly relevant for Australian cultivators, what are their operating costs going to look like?

Australia has some natural advantages over Canada, with our warm and cannabis-friendly climate; proximity and familiarity with emerging Asian markets; a robust health industry ecosystem; and a cannabis industry-friendly government. We also have a strong pharmaceutical approach to cannabis and well established scientific institutions which leads to a favorable environment for R&D in the cannabis space. But what about utilities and labour, how will Aussie cultivators stay competitive in an increasingly commoditized market? Australia certainly punches above our weight in the nutraceutical manufacturing space, but will cannabis companies be savvy enough, and act quickly enough, to avoid this Canadian malaise?

This is why the break-neck growth in Australian medical cannabis approvals is so important. In a world of financial hurt, these figures are reason for cautious optimism. There are still open questions about how many patients these figures truly represent – something FreshLeaf Analytics will be publishing on soon – but monthly product sales are already in the millions of dollars.

As the market matures the gradual but ongoing trend of relaxing regulations will continue and we expect that approvals will exceed 30,000 in the current calendar year and we will close December with over 10,000 current active patients. Based on FreshLeaf’s internal data modelling, that will translate into $50-60 million annualised revenue by the end of the year.

And though the stock markets will eventually rebound, this kind of downturn can actually be quite useful for sorting the wheat from the chaff. Moving into cannabis 2.0, investors are looking for real revenues, viable business models, and a reasonable path to profits. The sector will need good business intelligence and solid numbers. Something that FreshLeaf Analytics will be happy to provide.